Reverse SAD can bring about springtime depression among some people, which requires just as much care and attention as any other mental illness.

Springtime usually brings with it optimism, hope, and happiness. Unfortunately, for some people, the happy season isn’t all enjoyable and pleasant. The spring season can sometimes bring about showers of sadness and exacerbate symptoms of depression and anxiety. Yes, that’s right, springtime depression is most certainly a thing. You might have heard of Seasonal Affective Disorder (SAD), but have you heard of Reverse SAD?

With spring just around the corner, people already battling depression and anxiety might experience their symptoms worsening. It can be difficult watching people enjoy the beauty and joy of the season while you’re stuck in the same loop of hopelessness. This article explains what Reverse Seasonal Affective Disorder (Reverse SAD) is along with its possible causes, including helpful tips on how to deal with it!

Most of us are familiar with Seasonal Affective Disorder (SAD), a type of depressive disorder that usually begins in the fall season, advancing all the way into winter. It is a mood disorder that occurs every year at the same time and is said to be connected to a decreased exposure to sunlight. It affects around 11 million people in the United States, while a milder form of it known as the ‘winter blues’ may impact an additional 25 million people every year.

A much rarer form of seasonal depression that affects people in reverse is called Reverse Seasonal Affective Disorder or Reverse SAD. It impacts a much smaller number of people — women are more likely to experience it as compared to men. Around 10% of those who suffer from Seasonal Affective Disorder (SAD) report experiencing SAD in reverse. Their depressive symptoms begin worsening during spring, continuing all the way into summer.

Why Do Some People Experience Springtime Depression?

While there may not be a definite answer to it, there are plenty of theories regarding why it could be so. One theory suggests that sunlight can influence the brain’s production of serotonin and melatonin — the hormones that regulate mood and sleep — and with decreased exposure to sunlight in the winters, the levels of serotonin drop while melatonin production increases, resulting in mood changes and leading to SAD.

But that doesn’t explain reverse SAD. Experts speculate it could be a rare phenomenon where too much exposure to sunlight can trigger similar responses, resulting in springtime depression. On the other hand, some experts believe it has to do with hormonal changes that occur in the human body at different times of the year, which can impact behavior and mood. Or, among people with pre-existing depression, it could be brought on by witnessing other people enjoying the season while you find yourself unable to participate.

There doesn’t seem to be an accurate answer to the question as there hasn’t been much research regarding the disorder due to its uncommonness. May it be due to seasonal allergies or increased pressure to ‘celebrate’ the season; regardless of the causes, Reverse SAD can be a source of worry and despair and can leave an individual physically and emotionally exhausted.

Increased Suicides and Depression in Springtime

Although limited, research has revealed that mood disorders seem to worsen during springtime. Additionally, among people with pre-existing depression and stress disorder, the spring season can bring about a further decline in these conditions. Mood disorders and depression being the major culprits behind suicides and suicidal thoughts; it has also been reported that most cases of suicides and suicide attempts are recorded in the spring season. In fact, the cruelest month with regards to the most suicide cases is considered to be April.

Springtime blues are usually mild, however, they can sometimes transform into springtime depression. Luckily, there are simple ways to cope with and prevent symptoms of depression from worsening during the season. As spring days close in, here are ways you can manage and prepare to deal with reverse seasonal affective disorder (SAD):

It’s easy to fall into the habit of singling oneself out during such a time. It can feel like you’re the only person stuck feeling like this while everyone else seems to be enjoying their lives. Feelings like these can worsen one’s depression, which is why it is necessary to avoid them by all means. Reminding oneself that others might be feeling the same way too can help one cope with the symptoms of reverse SAD.

Depression is majorly characterized by sleep issues, like insomnia. People afflicted by springtime seasonal depression may notice their sleeping patterns changing. To stay fresh and alert, it is important to get adequate — 8 hours of — sleep. If it’s excess sunlight that’s meddling with your serotonin and melatonin production, causing one to be unusually sad, sleeping in a darkened room could prove to be helpful.

3. Work Out and Stay Active

Depression has a way of making one sluggish and lazy, so getting out of bed might not be something one would want to do voluntarily. But, it will do good to keep in mind the fact that staying idle only increases stress and anxiety, which, in turn, can exacerbate symptoms of spring depression. Exercising is known to provide relief to symptoms of stress and anxiety, in addition to boosting one’s mood and making one feel physically and mentally healthy.

We have already been over this. Depression and isolation are not an ideal duo. Interestingly, depression can lead to an increased urge of wanting to be left alone. Loneliness can cause increased stress and anxiety and can prompt the mind to be immersed in negative thoughts. During moments of severe depression, it can lead one to do drastic things, such as thinking about or attempting suicide. Therefore, it is best to remain surrounded by people one trusts to keep such thoughts at bay.

A nutritious diet is not only crucial for physical health, but it can also strengthen the mind. Depression is linked to poor lifestyle and dietary choices. Consuming a diet rich in nutrients such as omega-3 and omega-6 fatty acids, proteins, fiber, probiotics, zinc, folate, and antioxidants is proven to significantly improve symptoms of depression if maintained along with proper mental care.

Self-care often goes neglected and forgotten amidst the busy flow of life. With depression weighing one down, it can be even more challenging to practice and maintain a routine of activities that cater to one’s mental and physical well-being. Self-care activities can be as simple as journaling, reading, mindfulness exercises, and meditation, but these simple activities can greatly aid in managing symptoms of springtime depression.

Depression is a serious matter and can lead to severe problems and even suicidal thoughts and suicide attempts. Depression, no matter how mild a case, must be discussed with a mental health expert immediately so that a treatment method suitable to one’s condition can be designed and administered.

‍
Reverse seasonal affective disorder or Reverse SAD may be a rare disorder, but it exists nevertheless and requires just as much care and attention as any other mental health issue. The spring season is a source of joy and hope for most people, but for people who might find themselves experiencing springtime depression, it can be a tough time. This spring, make sure to prioritize your mental health and don’t be scared to seek professional help if necessary. 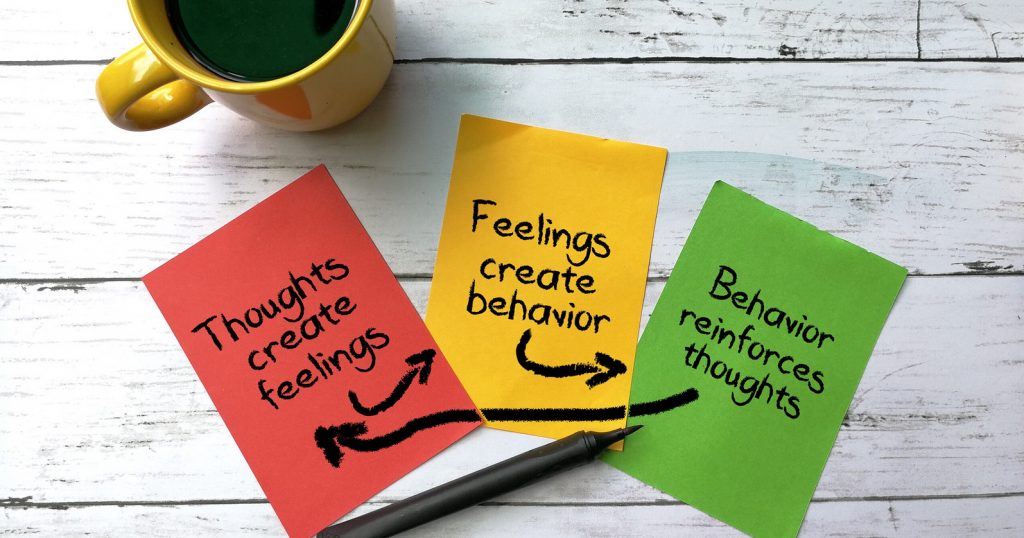 Cognitive Behavioral Therapy: How to Treat Your Anxiety?

Cognitive Behavioral Therapy (CBT) is a common method aimed at developing skills to manage emotional responses for healthy mental wellbeing. Mooditude is one of the best apps to practice CBT and address several problems like depression, anxiety, stress, etc. 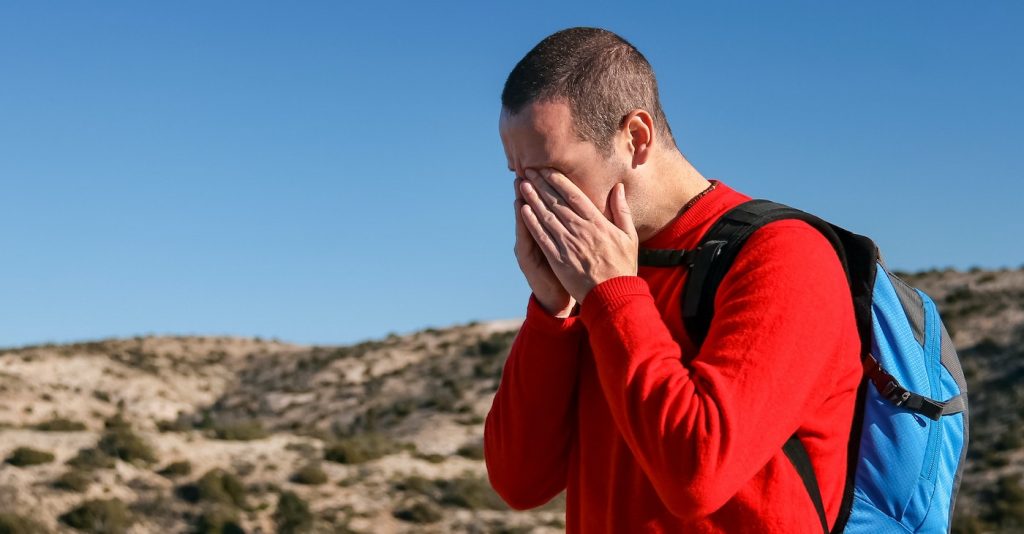 Mental fatigue or Mental exhaustion can happen to anyone. It drains you emotionally, rendering you unable to perform even simple tasks without feeling overwhelmed. But, it can be easily prevented and treated. Read our tips on how to overcome your mental exhaustion!